This is my blog & my website and I invite you to check it out!

This was from last weekend's posting, but I invite you to subscribe to my blog and follow along on my journey!

Just curious – I am going to be working the majority of the weekend and sometimes it feels like it never stops. But I have to see the bigger picture of things. I have to see the end-game. I keep telling myself that I do.

But why are so many people willing to "say" they want to do the extra work necessary to pull themselves up by their bootstraps and move ahead for themselves and their families or whatever it is that is important to them, but unwilling to actually do the work? Have I written on this before? I feel like it's something that just grinds me over and over. It's not like it is only the younger generation or the Gen Y or the Gen X or even the baby boomer generation. Are people tired or are they less motivated today than before?

Yesterday I read in Penelope Trunk's blog about her farmer and how he views things today – she writes, "I asked the farmer how he gets the cows to go to the corral. He says he used to try to force them. And it was always frustrating because they didn't want to go. He was always fighting against them. Now he tells himself he has an infinite amount of time. He tells himself it doesn't matter when he gets them in the corral as long as he's making progress. Sometimes he loses one or two cows as he's going, but he knows they'll come later if he gets the rest of them. And sometimes, if a cow isn't coming with the rest, he tries to get her to go the opposite direction, away from the herd, and it confuses her so much that she follows the herd. The farmer tells me that he stays calm and tells himself he just needs to be making progress." I think I would like her farmer…But, maybe I need to just learn from what she has shared about him in this post. ﻿ "How to know if you're making progress". I don't very often refer people to a Penelope Trunk blog because, for me, she goes a little over the top, but I still find myself reading it and finding things to use in everyday ways. 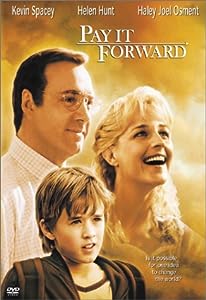 Cover of Pay it Forward

So, me & Penelope's farmer are going to just keep doing what we do and I'm going to keep putting one foot in front of the other and know that as long as I keep moving forward I'm making progress. Then the other things will all come along – eventually.

There are no comments to display.